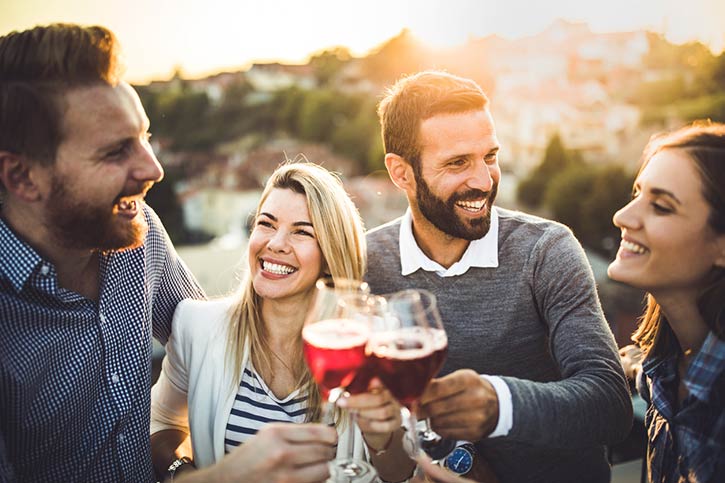 Everyone has a favorite Game of Thrones character, but it’s hard to deny that Tyrion Lannister is among the coolest. After all, he drinks, and he knows things! If you’re the kind of person who likes to be in the know as well, there’s no doubt you love to break out facts that surprise and delight your friends as you share a bottle. And if you all enjoy wine, why not offer up some insights on the group’s favorite beverage? Columbia Distributing can help you drink wine and know things with a few interesting wine facts you might not have known.

Most red wines come from one species of grape.

Whether you’re enjoying a Cabernet Sauvignon, Merlot, Pinot Noir or other red wine, odds are it can trace its roots back to the Vitis Vinifera grape. This grape originated in the Caucasus Mountains in Eastern Europe and has been used to produce wine since 8000 B.C. Eventually, the grape made its way to France, where the popularity of winemaking boomed. Since then, many grape varieties have been created that all date back to the Vitis Vinifera, including the Cabernet Franc, which is a parent of the Cabernet Sauvignon and Merlot grapes.

Some people are afraid of wine – and their phobia has a name.

Although it may shock you to hear that someone couldn’t enjoy a nice glass of wine, people have been diagnosed with a fear of this beverage. This fear is called oenophobia, which comes from the Greek word for wine, oeno. People who suffer from oenophobia may act irrationally when there is wine nearby and can experience palpitations or shortness of breath. Sadly, they are not able to relax their nerves by opening up a bottle of red.

Toasting with wine comes from the Ancient Greeks and Romans.

When gathered to drink wine with friends, it’s often customary to toast each other and clink glasses before taking your first sip. This tradition dates back centuries to the Ancient Greeks. The host of a gathering would pour everyone a glass and take the first sip in order to show that the drink wasn’t poisoned. Eventually, this practice carried over to the Romans, who added their own twist. After gathering their glasses together, they would often dip toasted bread crumbs into their drinks to reduce the acidity of the wine. This led to the phrase “toasting” that is used today.

We all know that letting wine age can enhance its quality, but this might be taking it to an extreme. The oldest bottle of wine in the world is called the Speyer wine bottle, which dates back to 325 AD. This 1,650 year-old bottle was found in 1867 in the grave of a Roman nobleman, who is thought to have been buried with it. About a third of the bottle is filled with olive oil, which was used as a preservative at that time. The bottle is sealed with wax and has dolphin-shaped handles. A debate remains over whether or not the bottle should be opened, but for now, it resides intact in the Historical Museum of the Palatinate in Germany.

Know Your Wine – and Where to Buy It

Share a few of these facts at your next get-together, and before long you’ll be known as the friend who drinks and knows things. Now you know the facts, but do you know where to find wine made in the Pacific Northwest and around the world? Contact Columbia Distributing today to learn more about the wines we offer in Washington, Oregon, and California. For additional information, check out our alcoholic and nonalcoholic brands online.